I love learning new things.  It’s common for me to suddenly become interested in a particular topic and just fall down the rabbit hole, reading, watching and listening to everything I can about it.

Lately, I’ve been reading up on the history of electronic music.  More specifically, I’ve been learning a lot more about synthesizers and rhythm machines of the 1970s & 1980s.  Since I grew up playing a LOT of classical piano, I largely ignored these synths and drum machines the first time around. Admittedly, some of the music from the era sounds a bit dated, but at the time it was something very new.  (I would be a bad li’l blogger if I didn’t give a tip of the hat to the amazing synth-oriented blog at Matrixsynth. They have really helped me get all learned up goodly.)

I now have a greater appreciation of the experimentation going on at the time.  As a result, I’m playing around with a lot of the sounds and will be posting some new stuff soon.

I can only hope it won’t all sound like this:

I’m also trying to figure out a way to purchase THIS thing and sneak it into the house without waking the baby and/or ending the marriage.  I’m sure it’ll be fine. 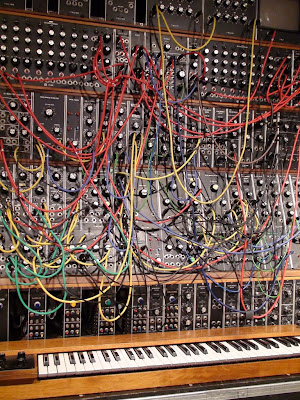 Unfortunately, the banana wasn’t there. That’s right, I stood there grasping at air like some stupid Midwestern air-grasper for several minutes before I realized I was no closer to achieving the coveted rank of “Smug Banana Enjoyer.”

Patty had earlier handed the banana to Isla, who adorably started chewing on it, resulting in the following incriminating photo. As I mentioned previously, Isla is starting to eat real food now.  As a result, I have to accept that I’ve officially entered the stage in my life where food mysteriously disappears more quickly than it used to. First it’s bananas, but eventually it will be cereal, pizza, cereal pizza, and leftovers from Shakeys.

I’ve previously mentioned that Patty & I are learning American Sign Language (ASL.)  As a result, we have been communicating basic signs to Isla.  I was initially skeptical that children are capable of interpreting and communicating via ASL at such a young age, but once I saw videos of it, I was convinced.  Recently, Isla has been signing “Mom.” We weren’t sure at first, since it tends to get lost in the general flailing and major tantrums.  Luckily, Patty was taking pictures the other day when Isla signed “mom” very clearly. I’m so proud of my little girl! A good friend of mine asked if I was jealous that her first sign is “mom.” Since I’m obviously jealous of everyone, the answer is “yes,” of course.  C’mon!  I’m the one who plays piano for her. I’m the one who provides the “Daddy Snuggles.”  I’m the one who gives her an inexcusably large quantity of low-fat iced coffee drinks available at any retailer!

…Uh, scratch that last one.

Of course, she might just be making an obscene gesture. In which case, I have a whole lot of NEW things to worry about.

This is a little 2-minute piece I recorded on the iPad using an app called iMS-20.  It’s based on the classic Korg MS-20 synth, but the app throws in a step sequencer and drums as well, so a person can construct entire songs worthy of blogging about.  It was fun to play around with a virtual synth on a device I can (and will) easily misplace.

This piece is called “Cartoon Physics” and it’s just a fun thing I whipped together at the coffee shop over a couple of days. That’s right, I did something besides mooch free Wi-Fi like Moochie McMoocherson. Although I love being a dad every day, yesterday was one of those landmark “dad moments.” That’s right, we took Isla to meet Santa for the first time. The Man took a few moments out of his busy schedule to take a picture with our little girl. Man, she’ll be dropping his name into conversations for months! “Well, you know I actually MET the guy…” And so forth.

We also visited the Santaland village at Macy’s in Downtown Minneapolis where the theme was “A Day in The Life of an Elf.” Isla’s bright eyes and visible excitement completely distracted me from pointing out that these elves need to stop joking around and step up their game if they’re gonna be ready by Christmas Eve. Just sayin’.

Later, we took some time to walk around Macy’s and bask in the glow of the holiday decorations (despite Macy’s strict “No Basking” policy.)

Definitely a perfect day out with the family.